WHAT PEOPLE ARE SAYING ABOUT "THE ASSASSIN'S GIFT"

"This author never ceases to amaze me. Just when you think you've worked it out, the plot changes and you are taken down another avenue. The characters are clearly defined (or so you think), everything in the story flows and it's one of those books that you can't put down. I'd recommend this book to anyone and look forward to the next one. I've read all his previous books and never been disappointed! "

"Ian C. P. Irvine is a master at capturing the imagination of the reader on the very first page and holding it to the very end. The Assassin's Gift is no exception!" 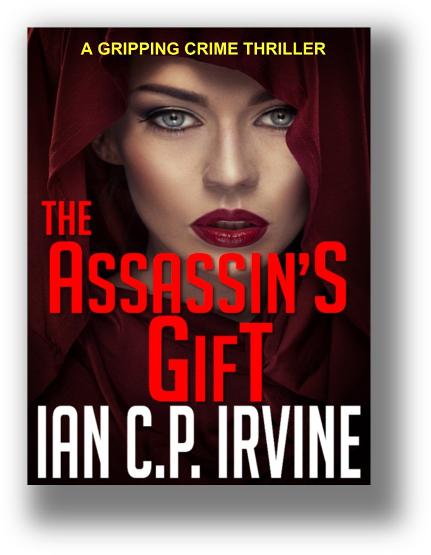 If there's one thriller you must read this year, this is it!

The Assassin's Gift is a tense, eye-opening thriller that will sweep you up and whisk you away on a breathtaking journey of adventure and discovery before dropping you exhausted on the shores of Loch Ness, incredulous, smiling, and begging for more!
Salvador is the top assassin in the world: an invisible killer, feared, respected, in demand, and hunted by every crime agency on the planet.
For Salvador, killing is an art-form and a way of life, until during an accidental meeting with a mysterious monk on the banks of Loch Ness in Scotland, Salvador is given a rare, unwanted gift: the ability to heal people.
Cursed and burdened with a 'gift' he cannot give back, Salvador must evaluate his life afresh, being able to kill with one hand, and cure with the other. Denying his Gift, he takes on his toughest assignments yet: to achieve the impossible by killing a top Scottish crime lord, Tommy McNunn, whilst locked up - and protected - inside Scotland's impenetrable and most secure prison, nestled amidst the Scottish Highlands. And then to kill DCI Campbell McKenzie, the man responsible for McNunn's imprisonment.
Now also hunted by Russia's top agent who is ordered to kill Salvador at all costs, Salvador discovers that everything in life happens for a reason, and that life and death are two sides of the same coin. A coin which he now owns.
But who is Salvador? What is the secret that protects his life? Why has he been given The Gift? And 'how' does he manage to pull off the crime of the century?
If you're looking for a new author to fall in love with and the Thriller of the Year!, look no further. Treat yourself to The Assassin's Gift. Download and read it NOW!
The Assassin's Gift is a fully independent novel, but may be read in a series following 'Say You're Sorry' and ' I Spy, I Saw Her Die'.

I would love to hear your thoughts and comments on the novel! Please let me know what you think: