WHAT PEOPLE ARE SAYING ABOUT "HAUNTED FROM WITHIN"

"I kept wondering how anyone could possibly have thought of this! The ending was phenomenal!"

"Brilliant Epic Novel! "As a seasoned reader I can only say this book is pure genius. The author makes Stephen King novels lightweight. I am simply amazed by this author's ability to tell a story so brilliantly. More please Mr Irvine."

"Amazing from start to finish!"

"A gripping ripping supernatural thriller that gets you thinking!"

"I have to say it's the best book I have read in a very, very long time.The story and characters jump off the pages and grab you by the throat, you need and want more, the idea behind the story is so compelling it's difficult NOT to find it believable!"

"Fascinating! " I don't usually write reviews but, WOW! What a story!" 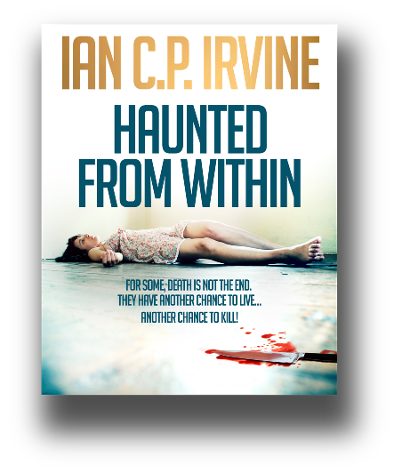 A crime thriller like no other you have read before!


Get inside the head of a serial killer, follow in his footsteps, and then help stop him before he kills again!

Fast paced, exciting, and forcing you to turn the pages into the small hours of the night.You won’t be able to put this one down!

When Peter Nicolson, an investigative reporter with a leading Scottish newspaper, starts to see visions of unsolved killings committed by a murderer that no one has ever caught, he sets out to solve the murders, to track down the killer, and find out the truth behind his visions.

In Peter's vision, there are seven knives. So far, there have only been six murders. Can he solve the case before a seventh life is taken? If he can't, who will be last to die?

But as he uncovers a trail of death that stretches across the United Kingdom and Europe, the eyes of a powerful global company watch his actions from afar, anxious that he will uncover the incredible truth behind their new drug treatment, and they conspire to make sure he does not succeed in revealing it to the world.

Haunted From Within culminates in a surprise ending that few will predict.


Once you have finished the book, the author encourages you to go online, and find out the truth for yourself. And when you discover the truth, it will make you question the meaning of life itself…and want to tell all your friends!

I would love to hear your thoughts and comments on the novel! Please let me know what you think: